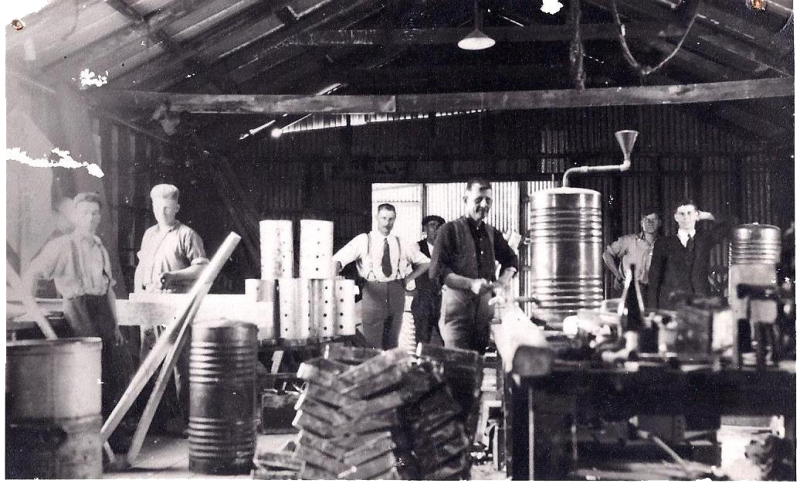 The work shop in Alexandra street, which was on the east side of the road north of the Altitude bar. This photo shows the manufacturing of dairy shed hot water cylinder’s - one of the many products that were made for the dairy industry by F B Hall.

Minutes from the first meeting of the company were taken on Sept 1st, 1923. Present were Frederick Benjamin Hall, Jack A Wainscott, Frances L Lound. It was agreed that the directors of the company F.B. Hall, J.A. Wainscott, & F.L. Lound draw as wages the sum of seven pounds each week.

The company commenced operation from rented premises in Alexandra Street, Hamilton, providing services to Hamilton and the Waikato, as well as products for the dairy industry – most notably the manufacture of large dairy cylinders. Plumbing required a different skill set to that of today’s plumbers. Water pipes were run in galvanized metal with lead basin connectors, soil and wastes in either lead or cast iron, drainage in glazed earthenware with cement joints, and excavation done with a team of drain-layers and labourers. Transport was by pushbike, hand cart or, if you were lucky, a model-T Ford truck.

Fred and Beatrice Hall were English immigrants; Fred bringing his engineering and plumbing skills from the old country which suited well the demands of manufacturing for the burgeoning New Zealand dairy industry. Jack Wainscott who was the foreman was skilled in working sheet metals and as a solderer, soldering cream cans for the Matangi Dairy Factory Glaxo plant.

By 1927, probably due to the economic conditions which would eventually lead to the great depression of the 1930s, the company went through hard times, but thankfully managed to survive.

In the mid-1930s a new plant was added; including a lathe costing 21 pound 10 shillings, soldering irons at 1 pound 16 shillings, and 2 ladders costing 7 pounds.

1937 was the year it was decided that the company directors be allocated 2 weeks of holiday each year, as it appeared that they had not taken any holidays before this time.

Around this date the growing company moved across Alexandra Street into larger premises equipped with a show room, solid fuel fires of all kinds (wood or coal fired), bathroom fixtures and tap-ware.

The workshop out the back had a drive shaft running at high level through to the rear of the building driven by an electric motor. This powered a number of large belts which in turn drove the lathes, drills, grinders and, towards the end of its life, the old corrugated-iron roller (which we still have), used for making water tanks and veranda roofs.

During World War II it appears the company did quite well - probably due to the increased demand for agricultural produce required to support the war effort.

In 1954  Jack Wainscott and Burty Hall retired, selling their shares to Hanwell Seymore, Eric Douglas and Burt Asplin (Burt being the very first apprentice that F B Hall ever trained.) Burt is driver of the 1911 Model T truck in the photo above.

Fred Hall passed away on July 3rd, 1956. Mrs Beatrice Hall continued the business until around 1959 when she sold her share to the remaining Directors.

Eric Douglas took up the role of manager around this time. Between Hanwell and Eric they started to put systems in place to improve productivity. Some of these systems are still being used today.

Ces Pollock started with Halls in 1950 and by 1958 was the senior tradesman. Ces attained the titles of foreman in the 1960s, manager in 1980 when Eric retired, then retiree in 1990. The original team of F B Hall had all but left when the torch was passed to the next generation of shareholders during the 1960s-70s. A new breed which included names like Garry Woodcock, Paul Ravlich, Colin Trebes, Graeme Coleman, Colin Douglas, Colin Middlemiss and Wayne Hodgetts began to steer F B Hall into the future, with Ken Douglas as manager.

The company out grew the Alexandra Street premises, so by 1965 had built a new workshop in Pembroke Street, converting and old house into additional office space. This site served the company well for 30 years, until in 1998 F B Hall relocated to its present site in Greenwood Street.

Over the years F B Hall & Co Ltd have been involved with many jobs of all sizes; carrying out the plumbing, gas-fitting, drainage and roofing tasks of our fellow Hamiltonians.

From Waikato Hospital and the University science blocks in the 1920s; to many of the high-rise buildings which comprise the citys skyline in the 1960s, to the dairy factories of the greater Waikato during the 1970s and 80s, F B Hall has been a major player in building the region and employing its citizens.

In recent times F B Hall has carried out contracts which include The Base Shopping Centre, the Centreplace redevelopment, The University of Waikato Library, and University Halls of Residence, to name a few.

F B Hall & Co Ltds currently employs 40 staff. This includes 8 apprentices who are all at various stages of their apprenticeship.

Have some work that needs to be done?

Simply fill out the form to the left and we will be in touch with a quote for you shortly!